I was on a panel at GDC this year called “Monetization of teens in a safe and legal way.”  I was joking before the panel that it sounded like “How to make money off of kids.”  Then I found out that it was QUITE the controversial session pre-conference.  If only I would have known, folks, I would have spiced it up a bit more. 😉

But in reality, that’s what all of us in kids entertainment are doing – making our living from figuring out ways to get kids to like our stuff and have their parents/caregivers pay for it.

Sounds insidious, but we ARE in a capitalist society.  If you are going to pick something to make money off of, kids entertainment is a pretty fun choice for your own work happiness levels.  And it IS possible to do it in a non-sinister way, with high integrity and keeping an eye on your ethics.  It’s easy – just make games/cartoons/toys that don’t suck.

LOL right? But really – make products that kids will love AND their parents will love.  Parents will be more prone to not mind paying for your product for their kids if it’s beautiful, fun and their kids like it.  Add a layer of learning in there and you are good as gold.  Make any of those factors superficial or not focus on it at all, you are going to start to see that revenue/profit fall.

Of course, you will have to make it legally and safely too.  But these should be pretty “Duh!” statements, right?

Legal – It is not difficult to comply with the regulations.  You will get fined or shut down if you are doing things illegally, so figure out what features trigger what laws (or hire someone who can help you), then decide whether to comply or remove the feature.  Easy as that.

Safe –  It’s also not hard to make your game or toy safe, either.  Figure it out.  If you can’t, seriously, don’t make it at all.  If you aren’t safe, or don’t have that as a priority, why are you making things for children in the first place?  There are tons of other demographics you can work with who are less concerned with safety being a priority.  Go there and make your money.  Please.  Leave the kids space to those of us who care and will continue to bend over backwards to keep the kids safe – not because we have to, but because we want to and we feel it’s the right thing to do.

Bonus advice:
Stop busting the balls of the person(s) on your team who are fighting for these things.  Thank them for being that person and having that drive.  Don’t make it a hostile environment for someone to bring up those sorts of concerns.  If they are bringing it up, chances are one of your audience will too at some point, so consider it a fortuitous heads up, not annoying nuisance.

And give that person a raise too while you are at it (or at least buy them lunch sometime).  Most of those people fighting for the underdog aren’t making the big bucks, so a little goes a long way.  🙂

I have spent years working for various children’s brands trying to make sure that every community I oversee cultivates a culture that encourages and promotes appropriate behavior online for child audiences, while offering resources for their parents.

I am so lucky to currently work for a brand that supports me in this personal and professional mission.  I am proud to show off our new parents page.  We have a robust vision for our parent outreach and this is just one of our first steps toward that vision.  Check out my second video highlighting some of the many ways we work to do this at Animal Jam. 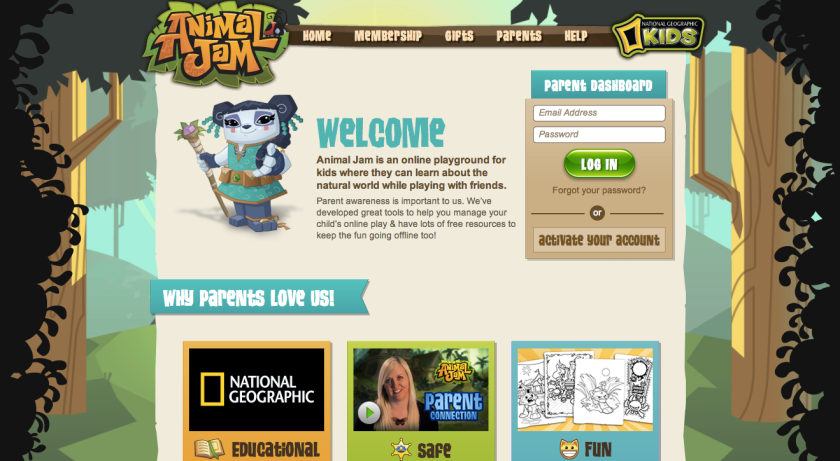 Yeah, I know.  First, Community Manager Appreciation Day (#CMAD) and now Safer Internet Day?  How many trumped up days do my peers need to feel good and noticed?  (The answer is infinite – we are passionate, insatiable service providers, so we will take whatever we can get.)

That said – the twitterspheres I pay attention to were all over Safer Internet Day yesterday.  For really great resources, run a twitter search on #SaferInternetDay or #SID2013.

At Animal Jam, we launched a new Parent Video series that we are calling Animal Jam Parent Connection.  We will go through tips for frequent issues parents deal with and review some of the offerings we have at Animal Jam.  This first one focuses on teaching good password habits.

I host the first, and my aversion to myself being videoed aside…, I think it came out ok.  Let me know what you think and if you have ideas of other topics we should cover, like parent controls, bullying, naiveté, safe chat habits, etc  🙂

The Summit was originally convened by Jim Cashel of Forum One in October of 2001 as a unique invitation-based event, bringing together thought leaders from business, government, finance, academia and the media, who despite different positions share a keen interest in online group collaboration. Each year we gather a select group of senior online community professionals to discuss topics addressing business strategy, emerging technologies, key trends, as well as many tactical issues during the breakout sessions.

This year, I will be hosting the Summit, along with co-host Joi Podgorny, Head of Community at Mind Candy. Joi is an online community expert with areas of expertise in virtual worlds and online experiences for children.

Really excited to be helping out with this this year.  Love this event and always leave excited and invigorated. 🙂

So I just realized all the frantic activity I have done trying to make sure all the Kids Online unconference follow up has been updated, I forgot to mention any of it on my own blog.  Oh the horror!

So, the unconference was a success. We started a wiki (http://kidsonline.idcommons.net) and listserv (http://lists.idcommons.net/lists/info/kidsonline) to keep attendees up to date

A handful of us went to the FOSI annual conference in DC last week.  It was interesting to see what government and the executive level of the bigger communities are thinking about and concerned with (everyone’s hearts are in the right place).  FOSI has a youtube page that they promised to upload the panels and Tanya Byron simulcast on (not there yet though)  If anyone have notes form that conference, please let me know.

Then we had a conference call this week (notes are here) and made a calendar of Industry Conferences that many of us would be interested in knowing about or attending (let me know if you want to help maintain this or have any good adds).  We decided that the main goals of the group should be:

I also wanted to get going on a weekly podcast.  I think if everyone can send me the hot news and trends, etc that they think would make sense for those in the industry, I will aggregate and read weekly and then broadcast out.