I am not the best at posting things of late.  Give me break!  It’s been mildly consistent for over 6 years!

The long and short of it is that life happened.  Big time.  This cool guy Kelty said he wanted to marry me.  I said yes. (That journey’s a feminist memoir in itself that I will gladly tell whomever would like to share a nice bottle of vinho verde or malbec sometime).

Then we did a roadtrip to bring my car to Utah, I looked at tons of amazeballs Chicago venues and went to a friend’s wedding as well.  Oh, and we managed to get my soon-to-be-stepkids (!!!) on their first camping trip (to Moab! the lucky ducks!)

I have been a deliriously happy workaholic for years now, bouncing from project to project, conference to conference, country to country, with not a plan to stop.  Having a stupid happy off-hours life now as well is taking some getting used to – kinda like getting ANOTHER latte when the large one you just had, had caffeinated you just fine.  But I am doing well adjusting, I think.  Time will tell, but the extreme way that life dumps either good or bad things on me seems to be evening out.  (a gal can hope, right!?)

Long winded way of saying I am still here and I ain’t going anywhere.  I am still going to live this life harder than most of my peers.  I am just being forced to round out some of my rougher edges.  And, apparently, I will retain my awesomeness, so good deal. 😉

The Summit was originally convened by Jim Cashel of Forum One in October of 2001 as a unique invitation-based event, bringing together thought leaders from business, government, finance, academia and the media, who despite different positions share a keen interest in online group collaboration. Each year we gather a select group of senior online community professionals to discuss topics addressing business strategy, emerging technologies, key trends, as well as many tactical issues during the breakout sessions.

This year, I will be hosting the Summit, along with co-host Joi Podgorny, Head of Community at Mind Candy. Joi is an online community expert with areas of expertise in virtual worlds and online experiences for children.

Really excited to be helping out with this this year.  Love this event and always leave excited and invigorated. 🙂

So most of you who read this know already, but if you don’t, I got a new job!  And its in London! Working with a fantastic people at a fantastic company who I have been a fan of for years! Exclamation points are fun!

I am the new Head of Community at Mind Candy, makers of the wonderfully addictive Moshi Monsters.  We are experiencing terrific growth in our traffic and subsequent community, thanks to aforementioned addictive quality of the game, as well as due to the super powers of our Marketing team.  My job is to make sure the kiddos (and grown up fans) stay safe, have fun, and keep on playing.  Cool, eh?

If you don’t already have a Monster of you own, go NOW and adopt one.  If you become a member you get access to even more cool stuff.  And once you have one, become friends with my Moshi.  It’s name is Fizmo (bonus points to those of you who know where that name comes from 😉 ) 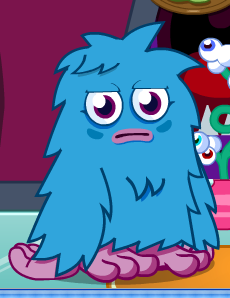 You have been warned.  This is gonna be big. 😉

Yeah, did I speak too soon or what…

So the bigger thing you should apparently worry about when moving your life to another country, even if it’s to a country that your own country is on benevolent terms with, is making sure your travel paperwork is in order.  And not last minute. And if it’s not, don’t go to the country until it is.

I didn’t do those things.  I was so worried about leaving the US, that I really didn’t pay enough attention to the details of getting into the UK.  As such, I didn’t really know that you have to have everything all buckled up before you get there.  Oops!  8 hours of detainment and a prompt flight home taught me a lesson I will never forget.  Do not underestimate paperwork.

SO, since I am a “teach a man to fish” sort of thing, I thought I would share more tips, just in case you ever have to make the move yourself.

I am still not done with the process, but thankfully my gracious hosts are letting me work remotely until I get it all sorted out.  I am gonna work really hard at not making a “Part 3” to this blog post. 😉

Well, it’s all hard.  I thought it would be all easy  (really I did – I am a REALLY good planner) but many parts are hard.  Saying goodbye to loved ones (who all act like you are moving to the moon as opposed to a country 6 hours away by plane), realizing you have to find a NEW fav book store/bike shop/local pub/burger joint, coming to grips with the fact that you actually do NOT need to transport your 7th grade passed notes.  All tough.

But the WORST is figuring out the PETS passport regulations:

My beloved Linus P Alexander has to stay with my family until Christmas when I come back for a visit.

The rules are rigid as the UK has abolished rabies and is justifiably paranoid of it’s return.  If you violate any of the rules, they take your dog and put him in quarantine!  for 6 months!

So I followed the rules and, get this, THE RULES INCLUDE A 6 MONTH WAIT TOO!  I was hysterical for a couple days.  At least he will be with family, but still, I won’t wake up to his snorting face in mine, pleading to go out for a walk. 😦

Blogged with the Flock Browser

So I was out of the country on various business trips for the past 3 months. Fun, tiring, informative, and cool.

But now it’s time to get back into my Chicago networking circles again. I thought I would share some of the events I want to go to (or at least try to). Please let me know if you want to go with me to any of them. Always nice to not walk into a room of strangers alone. 🙂

Wish me luck on getting to any/all of them, as there are also many friends and family holiday parties littered throughout this time as well.

Also, let me know about any other Chicago events. I am always up for meeting more Chicago peeps in or adjacent to my industry.

I have been traveling internationally for months now and very much so the past few weeks and therefore have been very busy.  I have been writing volumes (or facsimiles for volumes) on my personal blog the past couple weeks, but haven’t been transcribing my professional observations as much as I would like.  I promise to at least “try” to do so on my flights tomorrow.

But for those of you interested, here is my personal blog:
http:/jopod.tumblr.com

JAX is toy partner with special codes that unlock things

Question re: where did learning go from neopets now that viacom bought
– handled well – talked about how the games are more covert learning – web design, html, critical thinking, etc

First, apologies for my hiatus.  As I have shown in the past, I do not travel and blog well.  I have an crazy travel schedule for the next few weeks, so hopefully I can keep up blogging.  We will see.

I wanted to write a blog about my observations while in London this past week.  Trying to think back at what sort of interactive themes I saw, the same topic hit me in London as it did in Argentina – Cell Phones.

The states, as “crackberry” obsessed as we are made out to be, are SO far behind in cell phone usage from other countries.  Sure, we have the strange new text-speak commercials that introduce old school acronym talk to the masses.  (Which, frankly, bugs me, as I don’t know that many kids/young adults who still use these. I am sure they still sub for “u” or “r” for “you” and “are” but I doubt the use of sentence acronyms prevalence on texts is as much as it was in chat rooms.  But I digress…)  By in large, our US cells are still used for phone calls, storing grainy pictures and as horrible, chirping walkie talkies.

In London, SMS codes are an everyday part of life.  Americans may see them on sketchy commercials for free ringtones, cell phone wallpapers, or jokes of the day.  But they are incorporated into almost all marketing campaigns in the UK; they seem as ubiquitous as the URL.

There are a variety of core differences in the way the US and most of the rest of the world handle cell networks.  Texting packages are handled differently than here, for example.  Sending and recieving sms messages at $.10 a pop can get pricey.  US plans are starting to more widely offer unlimited plans.  And sms’ing in general is becoming less of a techie or teen thing and more of something anyone can do.

Another cool use of cells in the UK is accepting credit cards.  Most of the establishments I went to had their staff carrying mobile credit card terminals.  During my undergrad, I worked on tech support for the old credit card terminals, so I noticed and silently applauded those manufacturers for making a portable version.  Also, when I went to a local market in Greenwich, one of the booth owners told me that he could accept credit cards through his mobile phone now.  The integration of different technologies seems more fluid in Europe in general.  Even if we could accept credit cards through our phones here in the US, can you imagine the charges?

Which leads me to another pet-peeve that I have.  Cell phones, and almost everything having to do with them, are dictated by the networks here in the states.  Because of that, as a loyal Verizon customer, I can’t get, say, a Nokia N95 unless Verizon decides to add that phone to their repetoire.  Whereas in Europe, they can (for the most art) pick whatever phone they want and buy a SIM card for the network that makes the most sense for them.  This leads to a lack of inspiration to innovate on the part of cell phone designers selling to US companies, as the action stops being B2C and is only B2B.  AND most of the phone in Europe are tri-mode, so they can switch between different network coverage without much hassle.  (please, if I have any or all of this wrong, let me know as it seems so backwards here to me).

Just interesting to travel and see the innovation we do not seem to be taking advantage of.  I guess the optimistic version of that is, at least we can learn from their mistakes, right?

Someone was a good girl at her bath and picked a special treat (of course it was the most expensive one 🤨). She promptly tried to bury it, but we convinced her we wouldn’t take it.
Quick trip to LA to see some old Chicago friends and be all fancy & stuff #cabanalife
Birthday weekend exploring our new peninsula.
My mom was on a mission to give/plant flowers for all her kids this summer.
Thursday night in Santa Cruz
More shots from this weekend